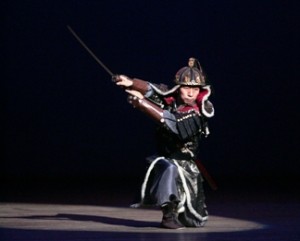 Gransmaster Kim in a traditional demonstration

According to Korean history there were three Dynasties relating to ancient times, namely Kokurye, Bakeje, Silla – The most powerful being the Kokurye.

The origin of Haedong Kumdo is from the military system of Kokurye, which dates back 1,500 years ago in Korea. One must also understand that throughout history Korea had been under continual threat from hostile forces.

In particular, some aggressor nations throughout long period destroyed virtually all records of the actual techniques of the ancient Korean martial arts.

There are only two remaining documents: the Moo Yeh Jee Bo and the Moo Yeh Do Bok Tong Gi, which give us insight into Korea’s martial history. These are the only two sources to trace the history of Korean sword arts.

In modern time this old martial art educational system for military use is now transformed for practise for the general trainee. Grand Master Kim, Jeong Seong, who is the founder & Chong Jae Nim of  United World Haedong Kumdo Federation, has created two-sword forms using both hands separately based on several kinds of Kumbups controlling one Sword forms which is using both hands together, Haedong Kumdo is based on real techniques for field combat.

One warrior against many with a real sword, which is totally different when compared with other widely known systems, in which the general player utilises a bamboo sword. United World Haedong Kumdo Federation was founded in June of 2001. We currently have almost more than 50 member countries and are growing at a rapid pace.

Our goal  is to Promote skills and be handed down  Jinyoung  Ssangkum Ryu (진영쌍검류 : 眞英 雙劍類) of two swords system as a Korean swords art , and  to build UWHKF into a large prestigious martial art Federation to spread Korean Traditional Culture in the World through it.

United World Haedong Kumdo Federation is open to every body in the World. The Re-popularization of Jinyoung Ssangkum Ryu(진영쌍검류: 眞英 雙劍類) ) of two swords system by the great efforts of  United World Haedong Kumdo Federation and its unique skills and movements with one sword and two swords is flourishing in high conditions. Our efforts which include numerous International performances through out the World with Annual Competitions & performance on the Stage and the publications of Text books for two swords system (Including Philosophy and skills) as well as the implementation of Jinyoung Ssangkum Ryu(진영쌍검류: 眞英 雙劍類), which is used and train with Two – Swords.