Only after we have completely emptied our minds from parasitic thoughts, we can succeed in remaining relaxed, but then again concentrated and it is then, when we are able to fully merge with the Universe and energy that surrounds us. We receive what our mind needs, we gain the energy that our body and soul requires and we dispose of the excess that burdens us. We are grateful for what we have accomplished and complete with the harmony we have acquired. 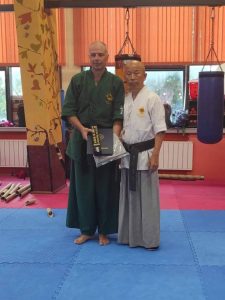 Starting August 27th and continuing until August 30th the Jinyoung Ssangkum Ryu Bulgarian Haedong Kumdo Association has organized an International Workshop under the guidance of Grand Master Kim Jeong Seong and held in Sofia, Bulgaria and by the way it was carried I would not hesitate to admit that I myself feel complete and accomplished. 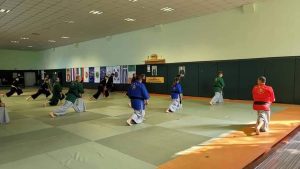 A total of 21 participants took an active part in the seminar, with foreign guests being from South Korea, Greece, USA, Ireland, The Netherlands, Sri Lanka and UK.

The day before the actual seminar started, Jinyoung Ssangkum Ryu Haedong Kumdo Bulgaria held a color belt and dan grading test under the supervision of GM Kim. Personally, I feel that everyone who took the test did very well, although I must point out the excess nervousness in some of the color belts, which prevented them from showing the best of their abilities and the full extent of what they have learned. Nevertheless, all of the HK Bulgaria students have passed their respective grading tests and have received comments on any of the details they need to correct further in their classes. 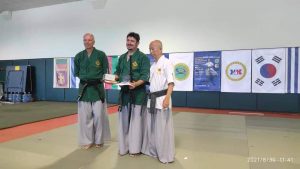 Three members of HK Bulgaria have further managed to pass their 2nd dan test, as well as Kathy from Ireland who passed the test for her 3rd dan. All dan test attendees further completed a real sword cutting test with cardboard tubes. At the very end of the test session GM Kim has spoken before all participants with notes of guidance.

The seminar itself was divided into two sessions per day, each session being 2 hours long and the total number of sessions for the whole workshop was five. The first day of the seminar was concentrated on Kimu, one’s work with energy, as well as kumbup forms with one sword. In my personal opinion, these first sessions were one of the most self-fulfilling experiences during the seminar. Everyone was let in their own way experience the energy flow and how the energy passes through your body and most important – how to let your body follow the energy. Following the energy helps both the body and mind when performing kumbups such that, all is done in a more harmonized manner, but it also helps the energy to continue through your body into your sword and only in that manner the sword becomes complete with your body and not just an instrument that requires much effort. Many of the participants spoke before the others about their particular experience and sharing that knowledge was most beneficial for everyone. 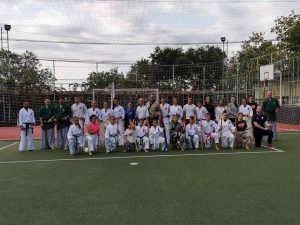 GM Kim has explained many details to help us grasp the immense importance of how to control, guide and feel the energy not only throughout our HK classes, but also throughout our everyday life and activities.

The following sessions continued with explaining and covering specifics of one and two swords kumbups, including yedo and bonkook forms. Many little details and glitches were cleared thanks to Grand Master Kim, as well as to Master Christoforos Christodoulou from Greece, who has helped along. At the end of one of the sessions there was yet another 3rd dan test held for one of the Greek participants who took the test before GM Kim and Master Christoforos.

GM Kim has dedicated nearly two full sessions on real sword cutting of cardboard paper tubes and virtually every participant had the chance to learn specifics on how to properly cut hard objects. This was a very important practical exercise, since it is the essence of the Korean Haedong Kumdo martial art with one and two swords. Before the actual real cutting each participant practiced specific details which could give better cutting performance, better sword guidance and handling, as well as gracefulness in performing a cut with a flawless technique. I believe this was one of the most exciting practical experiences throughout the whole seminar and which sparkled some great enthusiasm in all color belts present as they too had the chance to do real cutting with GM Kim. 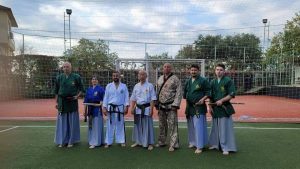 Following each morning session all participants attended lunch together in a nearby restaurant, where all spoke and shared their experiences and feeling of what they’ve learned. Each evening we all had dinner together at downtown Sofia, as well as little stroll around the pedestrian area at the very heart of the city.

Apart from practicing kumbups and cutting, we also had a practical session on two sword sparring drills (gyokkum) and I am very happy with this particular session as two swords gyokkum is a very specific knowledge that could be practiced only in Ssangkum Ryu Haedong Kumdo. The seminar was concluded with a two hour session on Monday (August the 30th) where GM Kim has taught the different level groups some new kumbup specifics, as well as forms needed for higher dan participants.

At the very end of the seminar all participants received a Certificate for completing the workshop, as well as some official plaques and gifts. Bulgaria HK Association presented Alexander Kostov and Mario Kitov with an HK aluminum practice sword for their great support in helping and organizing the seminar.

Following the official days of the seminar, some of the foreign guests namely GM Kim, Kathy from Ireland, Lisa from the US and Dominic from the Netherlands joined me, Philip and Alexander on a short 3 day trip around the country. We managed to reach the Black Sea coast and some of its famous sea resorts near the ancient town of Nessebar. We stayed at the St. Vlas resort and joined ABC Fight Club and Master Krasimir Gerginov 7 dan, who lead the club on their Taekwondo and Kickboxing summer camp. Grand Master Kim gave a full early morning demonstration class to all participants of the camp which included HK basic techniques, as well as paper cutting. There were many kids and young athletes who had a lot of fun learning HK basics. At the end of the demonstration class, GM Kim presented Master Gerginov with our official seminar plaque. The day continued with sightseeing tour around the ancient city of Nessebar, followed by some beach fun and ended up in the evening with a dinner with Master Gerginov and other instructors from ABC Fight Club.

During this day of our trip, we had lots of conversations about energy, healing and self-healing and I have learned a great lot from GM Kim on some specific details of healing with energy and the process of how this is performed. I would not be modest to say that I believe I have managed to understand in a great extent the knowledge and wisdom behind that process. I learned how to seek the REFLECTION in my past experiences in order to locate the origin of the health problem, then I learned to use DETERMINATION in order to refuse the existence of this same health problem, and as soon as the energy and determination helps me overcome this problem or issue, I learned to use GRATITUDE and be thankful for the help I have received. This process controls energy flow through our body and has the ability to heal. I would also never forget that following a healing practice, one should drink some water, because water is life. 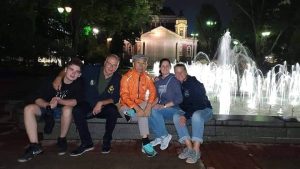 On the next day we continued on towards another part of Bulgaria and visited the ancient ruins of the Thracian Capital Perperikon followed by a visit to some hidden Thracian megaliths and altars near a tiny village named Kovil. We had a great hike and shared some great conversations on the way.

On our last day we headed towards the ancient Roman town of Philippopolis (now Plovdiv), which is the second largest city in Bulgaria and had a fun sightseeing tour around the Old City with a lunch at its very heart.

Unfortunately, it all had to end and everyone departed the following day.

To end my feedback, I would like to stress that besides the priceless lessons and shared knowledge that we have all gained from GM Kim, I have also made some new friends that I feel will remain my friends for life. I am already missing every single one of them and I am eager on any future occasion for meeting them up again and again…